I love it when a planned activity takes on a life of it’s own and the kids take it somewhere fantastic. I wanted to practice ordinal numbers with Sammi (first, second, third, etc.) so I challenged her to find 10 objects of different sizes and put them in order from smallest to largest. Then we counted them and Sammi proved her knowledge on the subject. Then the fun began!

Sammi gave me a challenge to find 10 purple objects. Elli was in her purple nightgown so Sammi said I could use her. I carried her to the couch and she consented to be my doll. I dressed her up in my other purple objects.

Then Sammi snuck in another challenge. This one was a rainbow challenge so that I could use Sammi.

Then I gave her a challenge to find 5 blue objects. She got to use Scott as one since his night shirt was blue. I let her take the picture, too, which is why it’s a little blurry.

Next Elli issued a challenge that we had to find every color in the rainbow in a different shape.

What activities have sparked your child’s imagination and morphed into something fantastic?

One day Elli invented a new game. I don’t remember it evolving from any patterns or previous games. I can’t even think of where she might have gotten the idea. As far as I can tell, it’s all her own and she definitely owns it!

After I change her diaper, I usually stand her up on the changing table to pick her up. One day when she was facing me she held up her hand for me to kiss. So I kissed her hand. Then she held up the other hand for me to kiss. So I kissed it. Then, without warning, she planted both hands firmly on my the upper part of my chest, like you see in the picture. It startled me so much I almost lost my balance!

She has repeated this game for over a week now. She absolutely loves it and giggles the whole time. I keep wondering where she came up with the idea. I guess I may never know. But I do know that it’s so fun to interact with her in a game that she initiates. I feel like the child waiting with excitement to see what the next part of the game will be. Elli’s the parent patiently teaching me what to do, like when I first didn’t realized I was supposed to kiss her hand and she nearly smacked my lips so I’d get it.

What games have your little ones invented that you had to learn?

After making the Pumpkin Patch craft, we had lots of extra pumpkins so we continued the pumpkin theme in our crafts. In this post we’ll be showing you 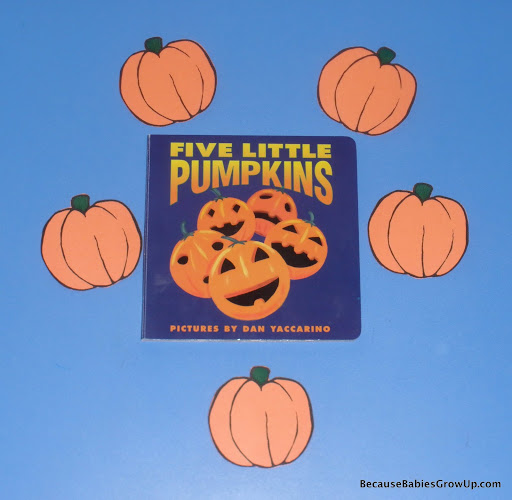 This is my favorite Halloween finger play. I love the board book illustrated by Dan Yaccarino, who’s got to be one of my favorite children’s book illustrators. I finally bought the book this year since our library here doesn’t have it. We used the pumpkins while we read the book. The first time through we took away a pumpkin for each pumpkin in the book and then the next time we put one pumpkin back as we read about each one. Sammi loved this and we read the book several times with the pumpkins. The pumpkins are fun all on their own with out the book.

Make Your Own Pumpkin Faces

With another set of pumpkins we added cut out shapes to make faces. I cut out triangles, squares, ovals and different mouth shapes. Then I arranged them on the pumpkins to show Sammi what a pumpkin face looked like. Then I took the shapes off and helped her build her own pumpkin faces. We’ve been working a lot on emotions: happy, sad, angry and afraid; so we made a face for each emotion (2 for happy, of course!) Then Sammi glued the pieces on all by herself. I really had to let go of the finished product and let her do it how she wanted. She did a good job, I thought. 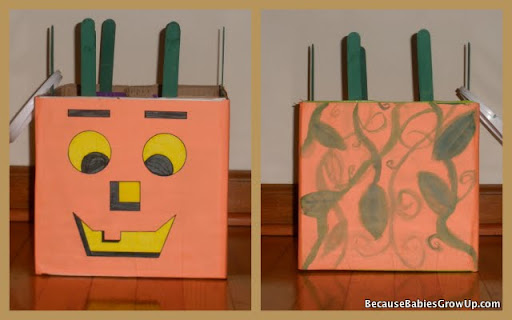 We did a Fall Festival Trick or Treat at Brent’s school this last weekend. We decided instead of just having candy, we wanted to have games for the little ones to play so that it was more fun for them. Admittedly, there aren’t an awful lot of medical students with children so we wanted the few who came to have a lot to do! And we wanted it to be interesting for the students themselves who came. So we made this ring toss game. I saw this idea on an old school Reading Rainbow episode. (I sure miss that show.)

We covered a box with orange construction paper. Then I printed off the face from here and colored it in with yellow and black. On the other side, my crafting buddy, Holly, painted vines and leaves. She also painted the craft sticks green, with a shade of green we mixed ourselves for the occasion. When the sticks were dry we taped them with purple duct tape inside the box. Then we cut out rings from sour cream lids. The kids, and even adults, had fun tossing the rings onto the sticks. They were then able to reach into the box and grab their candy.

This last activity I’m really happy with. It turned out better than I imagined it would. It sort of developed as I started to put it together. The pumpkins are sitting in the pumpkin patch. You pull the pumpkin out of its pocket and place it on a hay bale on the opposite side to decorate them for fall.

I was thrilled that Sammi enjoyed it. She loved pulling out the pumpkins and putting them on the hay. She even got that each hay bale got one pumpkin. She could even put the pumpkins back into their pumpkin patch pockets all by herself. Yippee! I was hesitant to let Elli touch it since I didn’t get any of it laminated and I was worried she’d do a number on those little pumpkins. But I decided to be brave and let her give it a go. She loved it too. And she was fairly gentle with the  pumpkins. A double success! And it made for a nice activity at church yesterday.

We had lots of fun with pumpkins this week. Now it’s on to bats and ghosts. I have some fun ideas we’ll show you all about once we’ve tried them out. Happy Halloween (uh, in about two weeks!)

Editor’s Picks for You

Oh the Place’s I’ve Been

The latest posts delivered to your inbox:

Grab Our Button!
(copy/paste into your own website or blog):